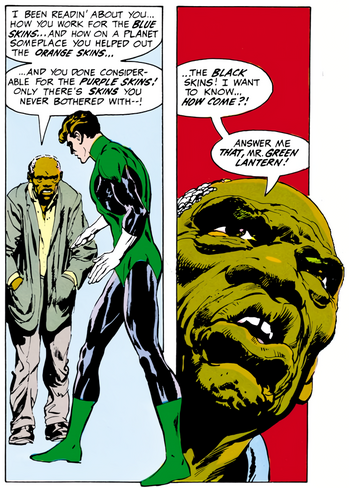 "Now that black girl knows something you don't!"
— The Onion News Network video,

The Strong Women in Film Award for Most Extraordinarily Intuitive Black Woman in a Motion Picture
Advertisement:

Profoundly wise, life-affirming short speech given by the poor, oppressed minority, uneducated, or mentally challenged character to the more-educated protagonist. Thus, perhaps, clearly distinguishing between the "Intelligence" and "Wisdom" attributes in Dungeons & Dragons.

Named after actress Whoopi Goldberg, whose character Celie in The Color Purple is an uneducated, viciously oppressed farmgirl who famously stands up for herself with such a speech. Her later character Guinan from Star Trek: The Next Generation, a wise, mysterious and Really 700 Years Old alien bartender, may have helped cement the trope name, although Guinan's life-affirming speeches tend to be more erudite.

Subversions usually take the form of some person interrupting a fight with a comment on why they shouldn't be fighting. Instead of stopping as expected, the rioters just continue fighting.

Frequently utilized by the Magical Negro. See also Waif Prophet, Book Dumb, Simpleminded Wisdom, Wisdom from the Gutter. Note that just because the character is black, and is giving a speech, doesn't make it a Whoopi epiphany speech — if the character is powerful, intelligent, and respected, they don't fit this trope.