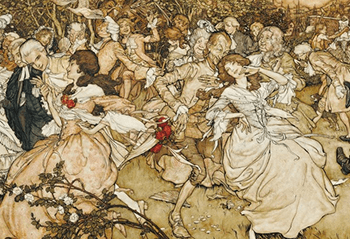 We've got the biggest balls of them all!
"I should like balls infinitely better," she replied, "if they were carried on in a different manner; but there is something insufferably tedious in the usual process of such a meeting. It would surely be much more rational if conversation instead of dancing made the order of the day."
"Much more rational, my dear Caroline, I dare say, but it would not be near so much like a ball."
— Pride and Prejudice
Advertisement:

Dancing. An occasion for gathering and celebrating. Also for gossip, intrigue, and romance. Often occurs at other celebrations, such as a feast.

The terms tend to be "balls" for Blue Blood and Royal Blood guests (expect Gorgeous Period Dress and Ermine Cape Effect, and certainly Pimped Out Dresses, as balls would be occasions when they pulled out the stops), and "dances" for more common sorts of folk.

Quite often in a story, Dances and Balls will be used as an opportunity to show that a Beautiful All Along girl (sometimes, but less common, guy) cleans up nicely (to the amazement of fellow protagonists). Other times, it will be used to show that the protagonist (particularly if it's a male lead) is virtuous and cannot understand the snooty ways of aristocrats. Expect a scene where he says he hates dancing or just plain can't dance (Though if he can get into it, he will find he really can dance.) If a character is a Fake Aristocrat this will be the ultimate test of their facade.

Super-Trope of High-School Dance, Dance of Romance, Masquerade Ball, and Let's Have a Cèilidh. In an action series, expect a Ballroom Blitz. Compare Dance Line (if people who were just watching are drawn in), At the Opera Tonight.