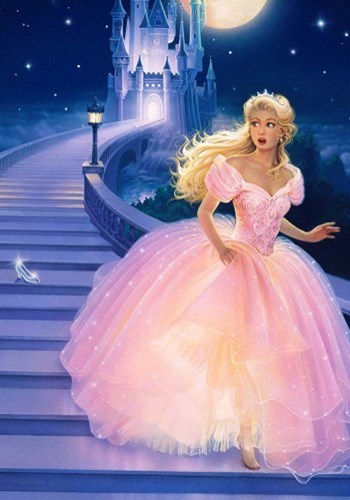 Lost footwear resonates with us all.
Advertisement:

Cinderella is one of the oldest, best known, and most universal stories in the world. The oldest known version is the ancient Greek tale of Rhodopis, a hetaira or courtesan who, according to a legend first recorded in the 1st century B.C., married the Pharaoh of Egypt.

The quintessential Rags to Royalty story, the best known versions in the western world are based on the one written by Charles Perrault in the 17th century (full text here

). If, on hearing the name Cinderella, you think of fairy godmothers, glass slippers, and a pumpkin turned into a coach, you're thinking of Perrault. In 1950, Disney's Cinderella adapted Perrault's story into a movie, cementing it in people's minds as the story of Cinderella. Unless, of course, you're Czech, Slovak, German or Norwegian, in which case you're probably thinking of the 1973 Czech/German ''Three Wishes for Cinderella''

, notably lacking in pumpkins, glass footwear, and godmothers of any extraction, instead featuring hazelnuts.

In 1957, Rodgers and Hammerstein adapted it into a musical for a television broadcast, starring Broadway royalty Howard Lindsay and Dorothy Stickney, Edie Adams, Kaye Ballard and Alice Ghostley (as the King and Queen, Fairy Godmother, and stepsisters, respectively) and Jon Cypher (of Hill Street Blues fame) as the Prince. One particular young lady took a week off from her starring role in the most popular play on Broadway at the time to play Cinderella - Julie Andrews in her on-camera debut.

The bare bones of the story are as follows: A young noblewoman's mother dies and her father remarries a woman with daughters of her own, then disappears. The girl's new step-family turns out to be cruel and vindictive, and mistreat her by making her work as a servant. This usually gives rise to a mocking nickname to do with her dirtyness (in English, Cinderella, or Cinder-girl, covered in fireplace cinders). When the local prince holds a kingdom-wide ball, they refuse to let her attend, but she calls on a spirit helper (usually representative of her dead mother) who takes pity on her and outfits her for the ball, allowing her to outshine everyone present and win the heart of the prince. There is, however, a limit to the spirit's help: Cinderella must return by midnight. On the second night of the ball, the prince contrives to keep her past her curfew, and in her rush to get away, she loses one of her slippers. The prince uses the lost slipper to track her down, and, once reunited, they marry. The vindictive step-family may or may not be punished, depending on the variation.

When people want to be a bit Darker and Edgier, they may refer to the Grimms' "Cinderella" instead, in which Cinderella — or Aschenputtel — plants a twig on her mother's grave, and the resultant tree, rather than fairy godmother, helps her, and the stepsisters cut off pieces of their feet to fit into the slipper, and are later blinded by karmic birds.

Presumably, the Grimms' version fits many people's idea of the dark, dangerous world of pre-Disney fairy-tales better than Perrault's, and therefore is sometimes erroneously referred to as the "original 'Cinderella'", despite being written over a hundred years after Perrault's, and about a thousand years after "Yeh-Shen". In general, because of the long oral tradition behind most fairytales, referring to any version as the "original" is problematic and best avoided.

In Britain, it's been a favourite story for pantomime for over a century, where it often adds the parts of Dandini and Buttons.

In 2008, Cinderella Four By Four, a Live-Action Adaptation with Setting Update starring Darya Melnikova, was released.

Gregory Maguire, best known for Wicked, also made a revisionist novel of the story called Confessions of an Ugly Stepsister, and Stephen Sondheim wove Grimm's version into the wider action of Into the Woods. There's even a retelling set in the Whoniverse, "Cinderella and the Magic Box", in the book Time Lord Fairy Tales.

This story's Aarne-Thompson Number is 510A (510B is the variants where a male figure persecutes her, as in "Tattercoats", "Cap o' Rushes", "Donkeyskin", and "Catskin"; one of the most common is the squick-laden variant in which the princess is on the run because her own father wants to marry her).

"Cinderella" and its variations contain the following tropes: