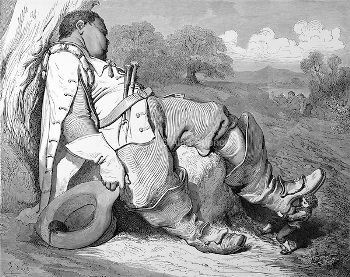 is a traditional fairy tale, first written down by Charles Perrault in 1697.

The set-up is similar to that of Hansel and Gretel. A poor woodchooper and his wife decide to abandon their children in the forest because they are no longer able to provide food for them. They have seven sons, one of them, the youngest, not bigger than a thumb and therefore called "Hop-o'-My-Thumb". Despite being tiny the boy is very smart and he hears about his parents' plans. In the middle of the night he goes outside and collects pebbles which he puts inside his pocket. When the parents take their children into the woods Hop-o'-My-Thumb throws a trail of pebbles, which causes them to find their way back. This scenario is repeated again the second time the parents try to leave their children behind in the forest. But the third time the door is locked and Hop-o'-My Thumb is unable to collect pebbles. Instead he uses a Trail of Bread Crumbs, but later it turns out that the birds have eaten everything.

The rest of the story is different: Hop-o'-My-Thumb and his brothers see a light in the distance. They walk towards it and discover a house. They knock and a woman opens the door, but warns the children that her husband is a man-eating giant. Hop-o'-My-Thumb explains their situation and the woman takes pity on them and lets the children in. Later the giant arrives home, discovers the children and plans to eat them. His wife convinces him to wait until next morning to which the giant agrees. The children are brought to a bed room where the seven daughters of the giant also spent the night. That night Hop-o'-My-Thumb fears that the giant might come out to get them and he switches his brothers' hats with the little crowns on the giants' daughters heads. And indeed, the giant gets hungry and leaves his bed to kill the children. In the dark he has to find them on the touch. When he feels the crowns on Hop-o'-My-Thumb and his brothers' heads he mistakes them for his daughters and leaves them alone. Then he goes to his daughters, feels their hats and slits their throats in their sleep. After that he unknowingly goes back to bed, planning to eat them in the morning.

The story is very well known on the European continent, but not in the English speaking world. There are many variants, including the Gender Flip Molly Whuppie.