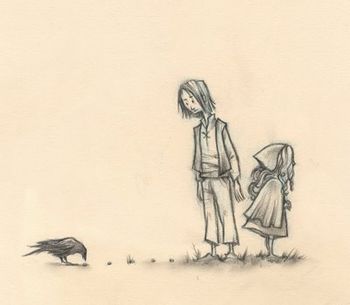 Character leaves a trail of things behind, à la Hansel and Gretel.

Sometimes, as in the aforementioned tale, the trail is left to find one's way back. Other times, it's used by someone else to follow them. This is usually to represent a character's resourcefulness either as a tracker or as a planner for when/if the need to backtrack is found.

Bread Crumbs need not be consumable or even material; sometimes the trail is one of footprints, golden twine, even an aroma of a special perfume. It, however, is usually not permanent, capable of being destroyed or tampered with by outside forces, such as wild birds or trickster-like beings, although even this is not the one rule.

Compare to Trail of Blood, where the "things" left behind are blood drops. If a video game does this, it's Follow the Money. Unrelated to Story Breadcrumbs.