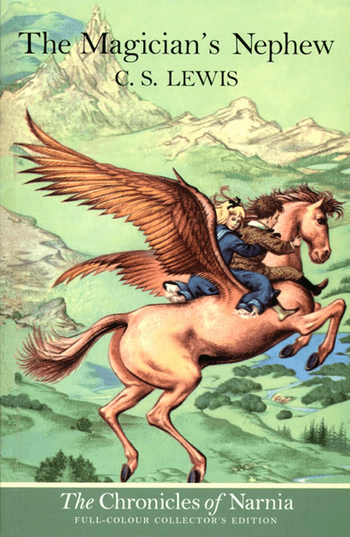 The sixth book written in The Chronicles of Narnia series, and the first one chronologically, its events taking place before The Lion, the Witch, and the Wardrobe.

In this prequel, two Edwardian children, Digory Kirke and Polly Plummer, accidentally visit the dead world of Charn, where Digory falls for Schmuck Bait, waking the Empress Jadis. She boasts about how she destroyed all life on her world, and forces the children to take her to London, where she causes a public disturbance. Eventually Jadis, the children, Digory's wicked Uncle Andrew, and a cabbie and his horse get a front row seat for the creation of Narnia by Aslan. Jadis is exiled to the far North, the cabbie and his wife (who gets transported there by Aslan) become king and queen, and the children and Uncle Andrew are returned home.