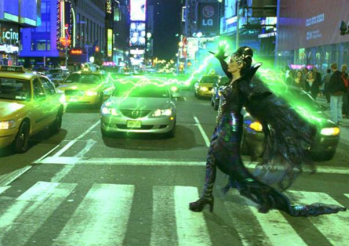 Not the green light you want at rush hour.
A Mage in Manhattan situation is where an evil character from a Magical Land enters our own with the intent of causing destruction. Hilarity ensues. Villains Blend in Better, but they do still want to Take Over the World, so such an appearance has a tendency to blast any masquerade to pieces.
Advertisement:

When the "Mage" first arrives in "Manhattan", you can expect Mugging the Monster to ensue. If it works though, expect that Muggles Do It Better.

Not involving J-Lo in any way, unless she's playing the person doing it. Compare Real World Episode, Refugee from TV Land, and Aliens in Cardiff (if they land in a less spectacular city). Contrast Your Magic Is No Good Here. Usually involves Save Both Worlds. Not to be confused with Urban Fantasy.