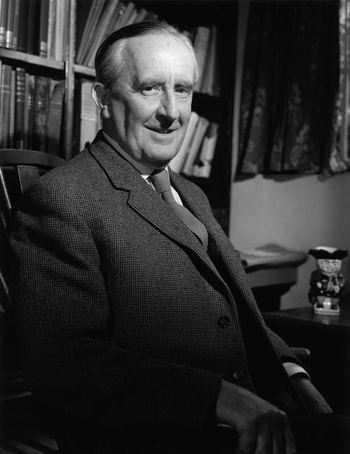 "How, given little over half a century of work, did one man become the creative equivalent of a people?"
— The Guardian, concerning The Silmarillion
Advertisement:

John Ronald Reuel Tolkien (3 January 1892 – 2 September 1973). English linguist (born in Bloemfontein, Orange Free State), university professor (Leeds and Oxford), Anglo-Saxon historian, CBE, and writer. The man who brought High Fantasy (and, it could be argued, literary Speculative Fiction as a whole) to the modern public. He is mainly known for his tales of "Middle-earth", most famously The Hobbit and its sequel The Lord of the Rings.

Most of his fiction in this setting has been published posthumously, despite most of it being written earlier than his most well-known books. The myth cycle called The Silmarillion — which Tolkien considered his "main" work, with the other two books as just spinoffs, yet never completed to his satisfaction — was edited from decades' worth of manuscripts to form a consistent narrative. Later books published over the years have instead presented his concepts and stories as they evolved, along with editorial commentaries. The Children of Húrin is an exception, a standalone narrative expanding on one of the Silmarillion stories.

Tolkien, known to most friends and family as Ronald, had somewhat of a troubled background. His father died when he was just three years old, soon after his mother had brought their family to England on what was supposed to be just an extended visit, and there they stayed for good. His mother struggled to raise Ronald and his brother alone, as she was ostracized by her family after becoming Roman Catholic. This deeply affected Tolkien, who remained a devout Catholic for life. He was also deeply affected by the countryside where he grew up in happiness but relative poverty, and later with the contrast it made with the industrial towns where he attended King Edward's School. When he was 12, his mother died and a Catholic priest became his legal guardian, though he lived with relatives and in boarding houses. In one such boarding house he met his future wife Edith, three years older, and his priest guardian, fearing a romance would distract from his studies, forbade the relationship until he was of legal age. They were finally married during World War I shortly before he was shipped off. A signaller in the Lancashire Fusiliers, he was on the front lines for several months and fought in the deadly Battle of the Somme. He contracted severe trench fever and was shipped home, which probably saved his life as the war claimed all but one of his friends at the time. He began the first versions of his Middle-earth stories in his sickbed.

Exactly how many languages Tolkien knew is up for debate. As far as speaking, in addition to English, he spoke German fluently, and had some limited fluency in French. He had reading proficiency in up to a dozen other languages (including dead or extinct languages like Latin, Middle English, Old English, and Old Norse), and dabbled in yet a few more.

He even made up a few of his own. They were never "complete," by his own admission, and most of his invented languages consist of only a few fragments. Nevertheless they were labours of love, and, in contrast to many other invented languages, were highly complex.

Tolkien's languages and Middle Earth Legendarium were all written primarily for his own amusement. He was never a professional author (someone whose only job is to write and publish novels), and his actual job was as a linguist and professor of philology and literature at Oxford University. He was also highly accomplished at his day-job and was particularly fond of Beowulf, an Old English Epic Poem which he liked to recite to his students.note He argued, correctly, that the poetic form of Beowulf was intended for oral recitation and students would miss the proper experience if they didn't hear it recited and only read or translated it Let's just say there aren't many authors who kept interfering with the foreign translations of their books (correctly, see for instance the article on translator Åke Ohlmarks) to point out how the translators aren't translating things properly into their own languages...

He was a friend of fellow academic and writer C. S. Lewis, who he met shortly after returning to Oxford in the 1920s. At Oxford, Tolkien, Lewis, Charles Williams and others formed an clique called The Inklings; they would meet on Thursday evenings, usually in Lewis' rooms at Magdalen, note although they would informally have a pint together at The Eagle and Child pub (aka "The Bird and Baby"), usually on Tuesday mornings, these were not official "meetings" and were devoted to general talk, not readings. and read discuss their writings with each other.

The collective term for all the stories about the world of Middle-earth (which is not actually the world's name, but the name of a super-continent within the world generally referred to as "Arda" by the peoples therein; it is used here for convenience's sake, being the name far better known to the general reader).

The Middle-earth books are:

Only the first four were published during his lifetime; the rest were published posthumously by his son and literary executor Christopher, except The History of The Hobbit which was handled by John Rateliff and The Nature of Middle-earth, which was edited by Carl F. Hostetter. Of these, The Silmarillion and The Children of Húrin consist of a single cohesive narrative edited together from Tolkien's texts, while the rest are collections of Tolkien's material (with commentaries and notes), ranging from complete narratives to early and new drafts, to essays and small fragments.

Additionally, there are several titles used for collective bodies of stories (which are used in the fictional world, and also real-world terms to include all relevant material independently of published books): the "Ainulindalë" and "Valaquenta" (the creation of the world), the (Quenta) Silmarillion (the First Age), and the "Akallabêth" (History and Downfall of Númenor in the Second Age).

His other works include several shorter tales (including several written for his children) and his academic writings, some published posthumously. Among these works are:

Although he regarded himself as an amateur artist,note when the publisher who'd accepted The Hobbit asked him to send illustrations, he did so, accompanied by a letter stating "The pictures seem to me mostly only to prove that the author cannot draw." many of his story notes were accompanied by drawings and paintings. His focus was on landscapes and maps of the setting. He allowed many of his works to be published with his books, including the cover art, maps, and full-page illustrations for the early editions of The Hobbit. One of the best collections of his artwork can be found in J. R. R. Tolkien: Artist and Illustrator, published in 1995. In 2019, the Morgan Library & Museum in New York presented an exhibition of his art, Tolkien: Maker of Middle-Earth

The collected Letters of J.R.R. Tolkien are a valuable source of information, both regarding Middle-earth and his personal life and views. Tolkien also aided in compiling the Oxford English Dictionary, and worked on the Jerusalem Bible, a respected Roman Catholic translation.

His greatest fiction was based on his linguistic research and invention. His work on this subject filled well over a dozen volumes.

revealed that C. S. Lewis nominated Tolkien for the Nobel Prize in Literature, but the committee rejected him on the grounds that his prose "has not in any way measured up to storytelling of the highest quality." Make of that what you will.

Lewis also loosely based the lead of his Space Trilogy, Dr. Elwin Ransom, on Tolkien (Elwin being a modern form of Anglo-Saxon Ælfwine, "Elf-friend"). Since his death, he has also appeared as a Historical Domain Character in a few fictional works like The Chronicles of the Imaginarium Geographica and Legends of Tomorrow. A Biopic based on his life called Tolkien focused on his university student and World War I years, starring Nicholas Hoult as Tolkien and Lily Collins as his future wife Edith Bratt was released May 10, 2019.

He gazed at the Tree, and slowly he lifted his arms and opened them wide.
"It's a gift!" he said.