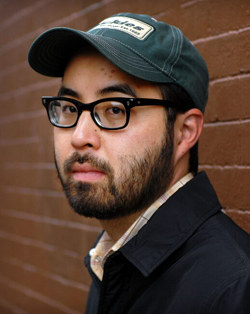 Adrian Tomine (born May 31, 1974) is an American cartoonist of Japanese descent. He made his name with Optic Nerve, which began as a self-published comic in the 1990s before being picked up for regular publication by Drawn & Quarterly. Optic Nerve was later compiled into several standalone publications. Tomine is also known for the graphic novel Killing and Dying.

His works are mostly about regular modern people and the ups and downs of ordinary contemporary life. The Loneliness of the Long-Distance Cartoonist is largely autobiographical, showing various important and not-so-important moments from throughout his artistic career.

In addition to his own comics, he has also done illustrations for other parties, particularly cover art for The New Yorker and album art for bands like Eels and Yo La Tengo.