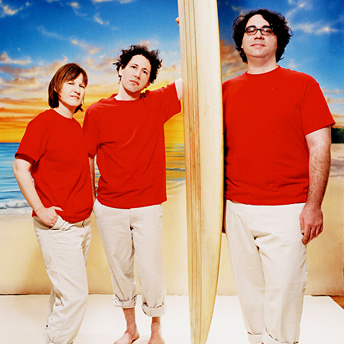 L-R: Georgia Hubley, Ira Kaplan, and James McNew. None of them surf.
Yo La Tengo is a Long Running Alternative Rock band from Hoboken, New Jersey. Founded in 1984 by former music reviewer Ira Kaplan (guitar, keyboards, vocals) and his wife Georgia Hubley (drums, vocals), they went though a series of bassists before settling on James McNew (bass, keyboards, occasional vocals). They've achieved almost no commercial success, but have become a touchstone of indie-rock nerds everywhere thanks to their large back catalogue, consistent output, and endearing songcraft, which is based on a beguiling mix of Kinks-esque pop-rock, Velvet Underground balladry, and Sonic Youth squall and fuzz. The latter helped popularise them in The '90s, to the point that they toured with My Bloody Valentine and Dinosaur Jr. in 1992.