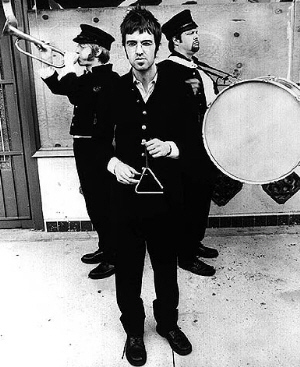 Life is hard,
And so am I,
You'd better give me something,
So I don't die.
—"Novocaine for the Soul"
Advertisement:

Eels is an alternative rock group formed in California in 1995. Contains only one constant member, the founder Mark Oliver Everett.note Son of physicist Hugh Everett III

, who formulated the often-misinterpreted many-worlds interpretation of quantum mechanics. Other musicians have come and gone over the years, but Everett (affectionately referred to as E) writes nearly all the material. Eels have contributed to many movie soundtracks, including Yes-Man and the first three Shrek films.

Eels was just chosen as a name because E figured that if you went to a record store, you'd see their albums filed pretty close to the albums he'd put out as a solo artist. Once the first Eels album actually came out, he found out that the "E" and "Eels" sections were usually separated by a lot of albums by The Eagles and Earth, Wind & Fire.

The band has been described as a vehicle through which E expresses his innermost thoughts, fears, and desires. This seems accurate, as the melodies and lyrics are generally very personal and introspective (especially on the most recent releases). As E wrote in his memoir Things The Grandchildren Should Know, each album reflects E's emotional state at the time he wrote the songs. Since E has led a pretty tumultuous life, the albums range from bright and optimistic to bitter and resentful.

Although Eels never really broke out into the mainstream ("Novocaine for the Soul" from Beautiful Freak was a minor hit, but that's about it for them chartwise in the United States), they do have a large and dedicated cult following. The 1998 album Electro-Shock Blues, E's effort to come to terms with the deaths of his mother and sister, is usually considered his best. The latest album, The Deconstruction, was released in 2018.

Not to be confused with the ones hiding in your hovercraft.