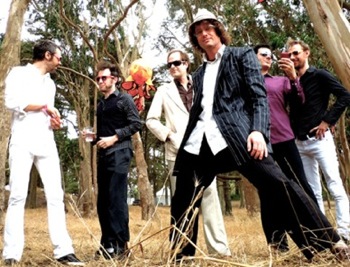 Electric Six are a Detroit sextet that formed in 1996. The band began in earnest as "The Wildbunch" until a similarly-named group from Bristol found out and complained. They're best known for their single "Danger! High Voltage!,"

a dance-friendly duet with a mechanic who won a contest to sing with the band because he was the only person to enter, and its associated video which involves the lead singer making out with a middle-aged woman on a stuffed moose, and all of them have glowing crotches. The video for their single "Gay Bar"

also received viral-type attention on the internet for its very unique take on the White House cabinet of US president Abraham Lincoln. Members of the band are also involved in such listen-worthy side projects as Evil Cowards

Their music is often described with words such as "disco," "metal," "new wave," "dance," "punk", "rock" and "fairly ridiculous" with influences ranging from KISS to Devo to The Doors to Captain Beefheart. While practically unknown to the general public in their home country, they were well received in the UK, which is rather ironic for a band that could be described as remarkably American and aware of it: their lyrics routinely reference US politics and have Shout Outs to their home town of Detroit. The singer and head songwriter, Dick Valentine, is noted for his unique and emphatic vocal delivery and his extensive lyrical use of both So Bad, It's Good sexual innuendo and humorous pop culture references.