You Are Worth Hell 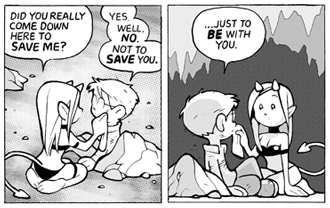 "I'm willing to follow you to Hell!"
— Stocking, Panty & Stocking with Garterbelt
Advertisement:

The Hero's Love Interest is doomed to some terrible fate. Neither escape nor rescue is possible. The only way the couple can stay together is if The Hero joins this fate.

The specifics aren't important; it's the sentiment that counts. True love and loyalty in its purest form, where the only actual "Fate Worse than Death" is being separated from the ones you care about, and everything else is worth it as long as they are there with you.

It could be Hell, Purgatory, The Nothing After Death, And I Must Scream, or just a Siberian prison—if it's a choice between enduring such a fate with them or being alone and free, you will choose the terrible fate every time. To sum up, somehow or another two or more people will also join facing what is quite likely the end of everything, thus expressing the message that You Are Not Alone.

Although sometimes it isn't actually a choice — it's a Downer Ending where everyone is doomed anyway, and they are simply affirming their acceptance and love for each other by agreeing that even oblivion is not such a terrible thing, so long as they're together.

Done well, this can be a Tear Jerker of epic proportions. The biggest difference between this trope and Together in Death is that the characters in question don't necessarily have to be dead for this. At least not yet, and perhaps they won't ever die at all — just spend eternity trapped someplace together. If their fortunes change, expect them to be Rescued from the Underworld. If someone's planned that from the beginning, it's To Hell and Back.

See also A Hell of a Time, where Hell is worth itself. Compare and contrast with I'm Going to Hell for This. Also contrast See You in Hell, which is usually about people you don't like. The Hell Seeker just plain wants to go to Hell, never mind about love.

Do not confuse this trope with Refusing Paradise. That trope is where someone rejects a good end instead of embracing a bad one.