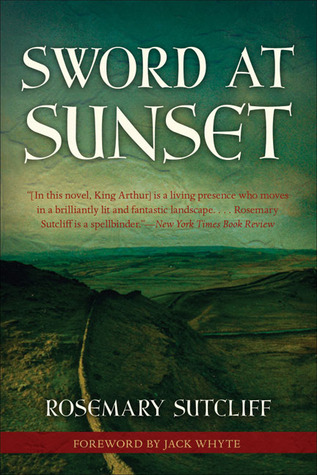 It's gonna be a long night.
Advertisement:

Sword at Sunset is a Historical Fiction novel by Rosemary Sutcliff published in 1963, one of the first modern novels to demythify Arthurian Legend. A generation after the departure of The Roman Empire, Artos, bastard nephew of the High King Ambrosius Aurelianus of Britain, forms a Company of three hundred cavalrymen to spearhead a united British front against the invading Anglo-Saxons.

Sword at Sunset strips out the magical and courtly tropes of medieval Arthuriana, drawing instead from sub-Roman archaeology; older written sources like the Mabinogion, the pseudo-historical Historia Brittonum and Historia Regum Britanniae; and Victorian anthropological treatise The Golden Bough. The core of Arthurian tradition is present in the figures of Artos’s Companions Bedwyr, Cei, and Gwalchmai; his troubled marriage to the chieftain’s daughter Guenhumara; and the vendetta of his mad sister Ygerna and her corrupted son Medraut. But the knights in shining armour are Roman cavalrymen in captured chainmail; the independent British princelings cannot be united round a table; and the Quest for the Holy Grail is the endless struggle to supply food, men, and mounts to a Dark Age army; to hold together, for a few years longer, the cut-off, broken-down remnant of a vanished empire.

Sword at Sunset is the fifth novel in The Dolphin Ring sequence, and the only entry in the series written primarily for adults. It is immediately preceded by The Lantern Bearers, and has distant sequels in Dawn Wind and The Shining Company.

about the writing of Sword at Sunset.

Sword at Sunset contains examples of: