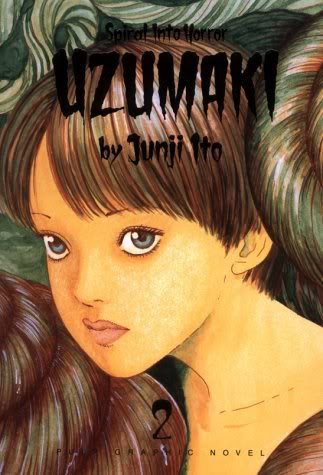 Spiral into the dark.
"This is Kurôzu-cho, where I grew up. I would like to share with you... the strange events that took place here."
Advertisement:

Kurôzu-cho, a small Japanese seaside town, is plagued by mysterious happenings. A man commits suicide in his own bathtub. A student's scar becomes a black hole. People start transforming into giant snails.

What do all these events have in common? The spiral. A suicidal man's body is contorted into a spiral. The student's scar becomes a spiral in its transformation into a black hole. The "snail people" are marked by their spiral-shaped birthmarks, which slowly transform into shells. To make matters worse, the small island town is completely cut off from the rest of the world. All ships coming and going are sunk by whirlpools, all air travel is disrupted by violent tornadoes, and the tunnel that leads to the outside world becomes an endless trip.

So begins the terrifying three-volume manga by Junji Ito (creator of The Enigma of Amigara Fault), centering upon a supposed curse placed upon the town.

Not to be confused, in any way, with the main character of Naruto. Or Spiral Energy. Or Spiral: Suiri no Kizuna, even though "Uzumaki" means spiral.

A live-action film adaptation exists that has a large portion of the story left out, although this is partly due to the manga still being incomplete when the movie was made. There are also two Licensed Games for the WonderSwan.

On August 30, 2019, Adult Swim announced a four-episode anime mini-series adaptation animated by Studio Drive and co-produced by the network and Production I.G USA; it is currently set to premiere on Toonami in 2022. The teaser

can be seen on their channel.