Manga / Until the Full Moon 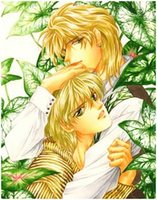 When did we take this picture?
" ridiculous!! I'm not going to let 100 or 200 year old kids go decide what's best!!"
— Arnet Vincent
Marlo: You may not believe this, but when I bask under the full moon I turn into a woman. I'm descended from a werewolf clan that transforms on the full moon."
Louis: You're right. I don't believe you.
—Chapter 5
Advertisement:

A two volume manga by Sanami Matoh, creator of Fake.

Marlo has a problem. On the night of the full moon, he turns into a woman thanks to a recessive genetic quirk brought out by his half-vampire heritage. Desperate for a cure, his parents return to Europe to pay a visit to Doctor Arnet Vincent, a family friend and the best physician in the vampire world. Marlo tries to keep his condition a secret from the vampire playboy David, his childhood friend and Arnet's only son.

He fails, and when Arnet declares that he is unable to cure Marlo, the parents decide that the next best solution is marriage— between David and Marlo. Hilarity Ensues.

Subsequent chapters mostly follow the adventures of the couple as Marlo comes to terms with the meaning of his transformation.