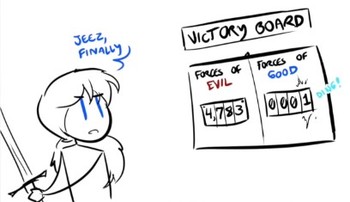 We can recover from this...
Rey: How do we build a rebellion from this?
Leia: We have everything we need.
— The Last Jedi
Advertisement:

In the end of the story, things might have gone bad for our heroes. They might have lost the base, have the villain remain victorious, or even have themselves killed. But even amongst all that tragedy, there's still something that assures that it doesn't end there, that there might be a chance to make things better, a ray of hope on the horizon.

This differs (almost to the point of being the opposite) from a Bittersweet Ending, where the protagonists win but at a great cost, and is not simply a Downer Ending with a few happy tones either. This trope means that, despite the heroes being soundly defeated, physically and/or emotionally, there's still some hope left; a reassurance that things are not as bleak as they may look, and there could be a chance to turn the tides around, even if everything that has been lost can't ever be truly recovered. Depending on the circumstances, this kind of ending may be (or become), and is often used as, a Sequel Hook, as it is promised that things will get better in the sequel. Though, don’t be surprised if the fans are pissed off and unsatisfied anyway, especially if the promised sequel gets stuck in Development Hell and never comes out.

Compare to A World Half Full, which is a world that despite its broken state can still be turned for the better, Fling a Light into the Future, which is a more deliberate hope establishment and usually happens at the start of the story, Hope Springs Eternal, which is the very concept of hope always living on no matter the circumstances.

Contrast Surprisingly Happy Ending, in which a seemingly bittersweet or downer ending turns into a happy ending thanks to a plot twist, Shock-and-Switch Ending, where it looks like there's going to be a Sudden Downer Ending but it's subverted for comedy, and Esoteric Happy Ending, where the creator thinks they have ended things on a positive note, but the Audience Reaction is Fridge Horror.

This is an Ending Trope, so beware of unmarked spoilers.