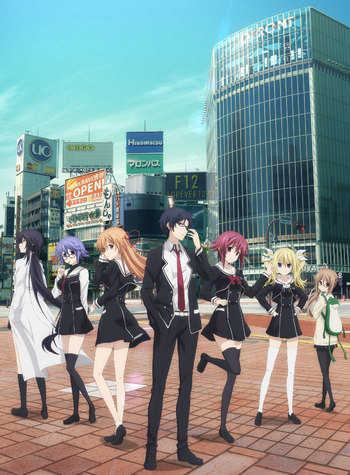 From left to right: Mio Kunosato, Hana Kazuki, Nono Kurusu, Takuru Miyashiro, Serika Onoe, Hinae Arimura and Uki Yamazoe.
"If you were God and your delusions became reality.
What kind of delusions would you imagine?
A sensual world? A despotic society?
Destructive sanctions?
Or..."
Advertisement:

Chaos;Child is a visual novel by 5pb. and the fourth installment in the Science Adventure Series. The game was first released for the Xbox One in 2014 and later released for the Vita, PS3, PS4 and PC. The story is set in Tokyo's Shibuya district in 2015, 6 years after the events of Chaos;Head.

It has been 6 years since the great Shibuya earthquake. Since then, the citizens undertook a project to rebuild Shibuya, and the once-ruined district is now back to the way it was. Still, the earthquake brought great destruction and took many lives, something that still lingers in the minds of the survivors.

Takuru Miyashiro is a high school senior and president of the school's newspaper club whose family died in the earthquake 6 years before. Adopted by the kindly doctor Wataru Sakuma, Takuru bonded with the other earthquake orphans Sakuma adopted, until a bad argument one day convinces Takuru to leave the house and move into an RV. Takuru becomes accompanied by his childhood friend Serika Onoe, foster sister Nono Kurusu, best male friend Shinji Itou, fellow club member and gamer chick Hana Kazuki, murder eyewitness Hinae Arimura, isolated orphan girl Uki Yamazoe, and Mio Kunosato, a misanthrope who has been sent in to aid the police.

They all deal with the bizarre events referred to as the "Reincarnation of the New Generation of Madness" (or the Return of the New Generation murders) while also using the superhuman powers that some of them possess. Takuru hopes to investigate and solve these murders ahead of the police and bring high praise to the newspaper club. All of the murders involve mysterious stickers, known as Sumo Stickers, that have recently been plastered all over Shibuya. As Takuru investigates, he realizes that these murders were not committed by ordinary humans, but by psychics. As he go deeper and deeper, however, Takuru begins to realize that he may be in over his head, and his very life is in danger. Eventually, Takuru finds his entire life turned upside-down by dark secrets finally surfacing.

Meanwhile, on a chat app, the mysterious user Ami-chan orchestrates the Return of New Gen murders for some unknown purpose of theirs...

Like it's predecessor, the game uses the "delusion trigger" system where the player can opt to view one of Takuru's daydreams/delusions. Additionally, the "Mapping Trigger" system is added in which the player uses their own wit to match clues together in the ongoing investigation of the "Reincarnation of the New Generation of Madness".

The PS4 and Vita versions were localised for release in North America and Europe in Q3 of 2017. An english patch for the PC version was released by the Commitee of Zero group in July 2018 and the game got an official Steam

release in 22th January 2019 (the Commitee of Zero patch also works for this version and fixes some bugs and translation mistakes).

An anime series produced by SILVER LINK. started in January 2017. The first PV for the series can be seen here

. It's licenced for streaming on Crunchyroll and Funimation with the latter providing a simuldub for the series.

Those eyes are God's eyes.