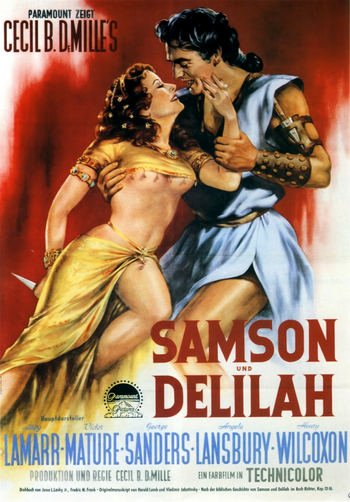 Her left hand knows what her right hand is plotting.
Batman: But we totally had sex.... Like hardcore. Three times.
Talia: It was all a cruel ploy to gain your confidence.
Batman: That was a cruel ploy? Sign me up for another!
— Badman, "Batman Can’t Stop Thinking About Sex

This trope is just like it sounds. A particularly insidious type of Romantic False Lead, this character is built up to be the Love Interest of the (or a) protagonist, but eventually The Reveal comes that they’re Evil All Along, and possibly even the Big Bad or The Dragon, or both!

This character is almost always female, and while she may pull a Sex–Face Turn (often by revealing that she became the mask and genuinely fell in love with the protagonist), they rarely if ever get back together. She is occasionally a Honey Trap as well as The Mole, but not always; sometimes the fact that she's a love interest and the fact that she's a traitor have nothing to do with each other. This can be an Ass Pull if the betrayal comes out of nowhere.

Was It All a Lie?

As a Betrayal Trope, many if not all spoilers will be unmarked.

Indy finds Elsa at gunpoint, his father warns him that she is a traitor, unfortunately Indy does not heed his advice and suffers the consequences

Indy finds Elsa at gunpoint, his father warns him that she is a traitor, unfortunately Indy does not heed his advice and suffers the consequences