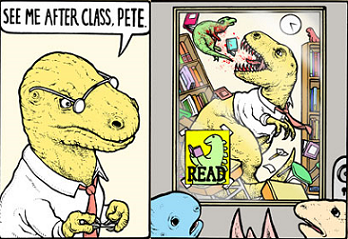 So you have a cruel, mean bully of a teacher, say the most banal sort of evil, that's got to make school life pretty harsh, right? Well, it could be worse, they could actually be evil on a much grander scale with much loftier plans.

This includes Mooks and murderers whose day job is teaching, all the way up to Big Bads who pose as teachers as part of the Masquerade. Not too uncommon in Wake Up, Go to School, Save the World situations, but can also appear in other works which are set in a school or University.

Sometimes this does overlap with the Sadist Teacher, but it isn't too uncommon for some iteration of supposedly "nice", and/or well liked, teacher to be secretly evil. Perhaps so secretly even they don't know.

If the Evil Teacher teaches in a Wizarding School, chances are that he's likely an Evil Sorcerer, a Sorcerous Overlord, or a Necromancer.

If they don't like teaching, a Sadist Teacher can result. If they do like it, they'll often end up a Badass Teacher. They may also be More than Just a Teacher. One rank up is the Evil Principal.

Also not to be confused with the Rule of Two or the Evil Mentor, who is not only evil, but also corrupts his disciples with evil teachings. Teachers found in an Academy of Evil are usually evil, but so are the students, so they don't count.