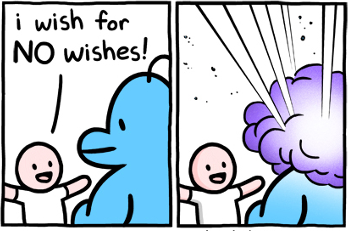 So the enemy is a Jackass Genie, and has been attempting to corrupt the heroes by giving them wishes, or maybe after the heroes are done will be free to wreak havoc. Be Careful What You Wish For!

Since choosing not to play the game would be boring, there is usually one wish that will actually get rid of the problem. This often involves exploiting some rule that the Genie has to follow.

It usually helps if the hero doesn't succumb to the temptation of trying to benefit from the wishes and defeat the genie at the same time, but some have beaten the odds and accomplished exactly that. Usually the results are a dramatic explosion, but not always. Sometimes it's merely a Reset Button being pushed.

The most benevolent form is Freeing the Genie - this act of immense selflessness might be rewarded by turning a stunned and grateful former-Jackass Genie into a powerful friend and ally, who (depending on the system) may even be free to use their powers indiscriminately in your favor.

Of course, whether or not the wording of the Wishplosion would work Depending on the Writer. Expect various works to come up with Take That! interpretations to popular wording from other works.

See also Did You Just Scam Cthulhu?, which is more about tricking superpowered beings into doing your wishes in general, and Logic Bomb, which is an equivalent trope for dealing with computers and robots.

Sonic uses Erazor's own lamp to force him to revive Sharha and restore the world back to how it was before. He then uses his third and final wish to trap Erazor back inside the lamp.

Sonic uses Erazor's own lamp to force him to revive Sharha and restore the world back to how it was before. He then uses his third and final wish to trap Erazor back inside the lamp.