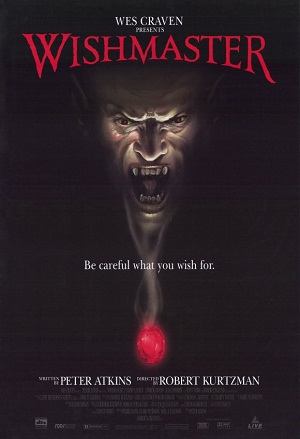 Once, in a time before time, God breathed life into the universe.
And the light gave birth to Angels. And the earth gave birth to Man.
And the fire gave birth to the Djinn, creatures condemned to dwell in the void between the worlds.
One who wakes a Djinn will be given three wishes.
Upon the granting of the third, the unholy legions of the Djinn will be freed to rule the earth.
Fear one thing only in all there is... Fear the Djinn.
— Opening Narration
Advertisement:

Wishmaster is a series of horror films about an evil genie.

In ancient Arabian legend, the djinn were almost nothing like the genies we know and love—they were demons. Beings "created from smokeless fire", the djinn were incredibly powerful beings who could nonetheless sometimes be trapped in various items and enslaved.

The Wishmaster films, while not sticking perfectly to Arabian lore, were intended to re-Grimmify the genie myth. Did they succeed? Undoubtedly.

In the first film, a drunken accident while a statue is being transported results in the discovery of a jewel containing an ancient Djinn, imprisoned since the days of ancient Persia, who is unwittingly released by a young art appraiser. As the Djinn begins to harvest the souls of the unwitting people around him by granting their wishes — usually in the most malevolent, cruel and gruesome way possible — the appraiser must figure out a way to imprison him once again without using up the three wishes he is bound to grant her... and dooming all of humanity in the process.

Not to be confused with the album and song by Nightwish.

These films provide examples of the following tropes:

Being an ancient evil spirit, the Djinn cannot die.

Being an ancient evil spirit, the Djinn cannot die.