Our Genies Are Different 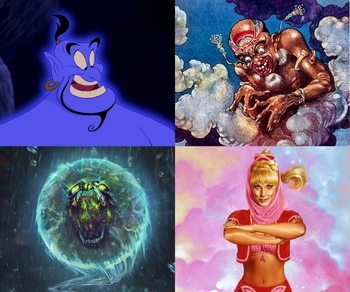 Your wish is their command... Sometimes.note Clockwise from top left: The Genie from Aladdin, a Djnn from Arabian Nights, Jeannie from I Dream of Jeannie, and a malicious Djnn from The Witcher.
"I beg you, my son," she said, "by the milk with which I suckled you, throw away the lamp and the ring! They can only cause us a great deal of terror, and I couldn't bear to look at that jinnee a second time. Moreover, it is unlawful to have relations with them."
— Aladdin's mother, Arabian Nights
Advertisement:

In Middle Eastern folklore and Islam, genies (jinn, Arabic for "hidden") were the first beings with free will, created out of "smokeless fire" by God before he created the First Man out of clay. They are (usually) invisible beings that are actually more like humans than we realize — they are born, grow up, marry, have children and eventually die. They are said to be made of "smokeless fire", perhaps something along the lines of Energy Beings. They are also extremely long-lived and highly skilled in magic. However, they can be killed by mundane means, if the Arabian Nights is any indication. (At least a couple of genies have been done in by a rock to the head). They were sometimes trapped in a bottle. They might grant you a wish if you let them go. Or they might have been bound to something like a ring or a lamp and forced to obey the orders of anyone who summoned them. Genies are creatures of free will; they can be good or evil and may even be religious. There are even various types of djinn, not unlike how The Fair Folk comprises many different creatures. Belief in genies is still common in the Middle East today.

In Islamic theology, God told the Djinn that they should bow to man's superiority, but their leader, Iblis, refused to do so; thus, a good chunk of them ended up imprisoned by Suleiman and other holy men in lamps and such and forced to grant wishes. Genies in Islam can also possess humans for a variety of reasons — they might have a crush on the human, or they might just be a jerkwad. During exorcisms, the genie is given the option to convert to Islam, leave the body of the human or die. Iblis, by the way, never repented, and in fact swore that he would corrupt mankind... in other words, he's their version of Satan (and in fact is sometimes called Shayṭān or Shaitan).note On a related note, linguists have proposed that that the word Iblis is etymologically derived from the Ancient Greek word Diabolos. That is, the Devil.

In popular Western media, genies are immortal beings almost invariably trapped inside a lamp or a bottle, often materializing through a puff of smoke. (Originally, at least part of those items only acted as a means to summon the genie and didn't actually contain it). They must grant you Three Wishes ("And ix-nay on the Wishing for More Wishes!"), which they may or may not screw up horribly. (In the Arabian Nights, this number ranged from one to infinity). Their precise spelling varies, but "djinn", "jinn" and "genie" are the most common; generally, depictions based more closely on the original folklore are called djinni or jinni, while the more modern three-wishes kind are more likely to be called genies.

Also, Genies are extremely likely to be an Amazing Technicolor Population and to have Fog Feet. Female genies in modern media typically wear Bedlah Babe outfits.

A few specific types of genies also tend to crop up. The most common are efreet (also spelled ifrit, afrit, and afreet). In Arabic folklore, these are generally understood as a particularly dangerous and chthonic, but not necessarily inherently evil, type of spirits; they usually have some link to "regular" jinni, and may be seen as a specific kind of the broader group, but this is somewhat vague and not always constant. In modern fiction, efreet/ifrits are usually a specific type of genie, and are often depicted as closely linked to fire; they are usually either evil or simply more powerful and less predictable than other or true genies.

The correct Arabic grammar is "one djinni", "two djinn" (also spelled jinn(i)). The English word "genie", used to translate "djinni", derives from the Roman "genius", which is the spirit inherent to any person or object, such as in the term genius loci. The same concept in Hebrew is called a shed ("one shed", "two shedim") and shida in Aramaic.

See also Genie in a Bottle, Benevolent Genie, Literal Genie, and Jackass Genie. Not to mention Our Ghouls Are Creepier; ghouls have their origins as a class of djinn, although modern Western works rarely depict them as such. And there's always a chance that The Genie Knows Jack Nicholson.

The Genie of lamp hidden in the Cave of Wonders.

The Genie of lamp hidden in the Cave of Wonders.