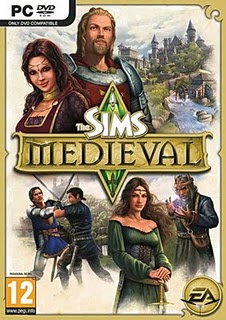 For a time the people were happy, but it could not last. You watched as their civilization was overwhelmed with violence, disease, famine, and Dire Chinchillas. Reflecting on these events led you to an epiphany: people are dumb. If you could just reach out, give a gentle push in the right direction...
— Patrick Stewart, opening cinematic

The Sims Medieval (2011) is a standalone expansion of The Sims series which takes place in a medieval fantasy setting. The player takes on the role of "The Watcher", a benevolent deity that guides the populace by controlling "heroes" in order to inspire the kingdom along the path to glory. Throughout the game you can control up to ten Hero Sims, using them to complete quests and various tasks that further the kingdom towards the "Ambition" you have chosen for it. These ambitions can range from developing culture, to amassing wealth, to dominating nearby countries, with several more options in between.

While the gameplay of The Sims Medieval is similar to that of its parent series in that the player controls of the actions of various Sims whose name, appearance, and personality traits are fully customizable, it streamlines many aspects of the previous games to allow more time for the completion of quest-related tasks and daily responsibilities of the Hero Sims' various jobs. For example, the only two "Needs" retained from the previous games are energy and hunger, with other activities such as urinating and relaxing instead giving positive buffs that make it easier to win sword-fights, craft armor at the smithy, write epic poetry, and a myriad of other medieval-themed duties. This game has a Darker and Edgier tone, with themes such as murder, religion, and alcoholism that were not present in previous entries in The Sims series.

The ten classes of the game are:

The Sims Medieval was released in March 2011 by Electronic Arts. An expansion pack, Pirates & Nobles