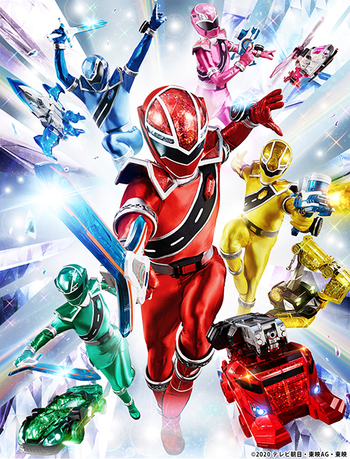 Kiramai-GO!
When people shine, a miracle is born.
That shine is the symbol of the warriors that can change the future!
Advertisement:

Mashin Sentai Kiramager (roughly translated as "Magical Advancementnote Mashin also being a pun on 'machine' Squadron Kiramagernote a portmanteau of 'Kirameiki' (Shining), 'Mage' and 'Ranger'") is the 44th program in the Super Sentai franchise that aired from March 8, 2020 to February 28, 2021, and the second Sentai entry in the Reiwa Era. It is the second magic-themed installment in the franchise, following Mahou Sentai Magiranger (2005). The series' overall themes are magic, gemstones and vehicles.

When the planet of gems and jewels, Crystalia, is taken over by Emperor Yodon, its Princess Mabushina escaped with the five Kiramai Stones. Arriving on Earth, the Kiramai Stones, able to transform into sentient vehicles known as Mashin, sought five individuals with a strong "shining spirit" known as Kiramental, to team up and partner with them as the Kiramagers in order to fight back and take down the Yodon's forces, who have set their sights on taking over Earth next.

It started airing alongside Kamen Rider Zero-One and later Kamen Rider Saber in the Super Hero Time block. Due to the COVID-19 Pandemic, Kiramager, along with Zero-One, was put on hiatus in early May 2020 after ten episodes, with several specials (including a cut-for-broadcast Episode ZERO) airing in its place for the next few weeks. This makes it the first Super Sentai season to be completely (in both production and airing) interrupted, although not for long; as Japan made significant progress in battling COVID-19, the show returned to production and then resumed airing on June 21, and aired continuously (save for annual pre-empting for special occasions) for the rest of its run.

The Kiramagers' equipment is made from a crystalline substance that is formed from Mabushiina's tears. So to get more for Juru's idea, the group makes her cry by giving her a tearjerker manga to read.

Example of:
Body to Jewel

The Kiramagers' equipment is made from a crystalline substance that is formed from Mabushiina's tears. So to get more for Juru's idea, the group makes her cry by giving her a tearjerker manga to read.