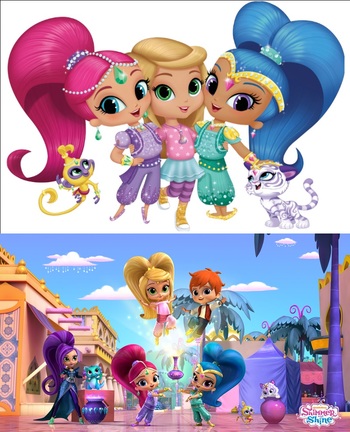 Top: Season 1. Bottom: Season 2 and beyond.
Shimmer: I’m Shimmer!
Shine: I’m Shine!
Both: Your genies divine!
Boom Zahramay!
Your best friends are on the way!
Advertisement:

Shimmer and Shine is a Nickelodeon cartoon. It premiered on August 24, 2015 and ended after four seasons on February 9, 2020.

The titular characters are fraternal twins and genies-in-training who, once per day, grant three wishes to their friend Leah. They often mess up the wishes and the three girls must work together to fix their mistakes.

Season 2 shifted the series to Zahramay Falls and gave away from the original Strictly Formula in favor of a new action-adventure theme, introducing the show's Big Bad Zeta the sorceress and having Leah and Zac visit whenever they want, but wearing genie disguises as humans are not allowed there. In addition, the animation has changed to CGI. Seasons 3 and 4 built upon the world and introduced additional areas of Zahramay, each with their own unique characters and situations.

Leah: Our mistakes came out great when we worked together!
Can’t wait till tomorrow, my best friends forever!
Shimmer and Shine: With magical powers that shimmer and shine,
Boom Zahramay!
We’ll see you next time!