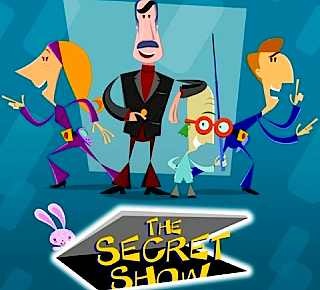 Hello there, you cutesy-wutesy little troping friends, Sweet Little Granny here, and welcome to... the Fluffy Bunny Show! Shall we sing our song?

The Secret Show (2006-2007) is either an incredibly silly Spy Fiction cartoon... or a ruthless parody of Martini Flavoured Spy Fiction. It's probably both. Any trope that gets even within a mile of this show tends to end up getting subverted, deconstructed or parodied. Like all good children's comedy shows, it can raise a smile in adults too.

The show follows top U.Z.Z. agents Victor Volt and Anita Knight as they thwart the various threats to earth's security, supported by Da Chief whose name is Changed Daily, always to something embarrassing and/or silly, and U.Z.Z. chief scientist Professor Professor. The most common foe is Doctor Doctor's T.H.E.M. and its Expendables. Other foes are the Impostors, a race of (probably) worm-like aliens who have special suits that allow them to assume perfect disguises; the Reptogators who live 60 miles below the surface of the Earth and are naturally stupidnote they have terrible eye sight, so they track people down by the smell of dirty teeth. They only become intelligent by sucking out the brainwaves of other creatures (most are too stupid to know this, however); and the Floaty Heads, aliens with floating heads who, according to the website seem to want something different every time they show up.

The format of each 15 minute episode is fairly regular and consistent. We start with Special Agent Ray clearing the time slot of The Fluffy Bunny show, run titles, have the briefing including Changed Daily's new name of the day, fight the often utterly ridiculous foe (with extra briefings as needed), and then close with a de-briefing. The show lasted for two series, consisting of 52 episodes in total, and won two Children's BAFTAs in 2007 for "Best Animation" and "Best Interactivity".

Originally a British creation airing on The BBC, this is among Nicktoons' independently-funded acquisitions it made in the later part of the 2000s, along with Kappa Mikey, Sky Land, Shuriken School, Edgar & Ellen, Ricky Sprocket: Showbiz Boy, Three Delivery, Wayside, and Making Fiends. The current distribution rights are with Universal, however.

The show is something of a hard prey to track down, rather appropriately, for collectors, due to lack of a reprint of the DVD collection, and can only really be found on Amazon Prime

Now has a Recap page in progress. Move specific episode tropes to their episode pages.

Definitely not to be confused with ''The Great and Secret Show''.

The aliens within a spider ship make a rap track with a few of the names used by Changed Daily from past episodes.

Did You Try This?

The aliens within a spider ship make a rap track with a few of the names used by Changed Daily from past episodes.

Did You Try This?