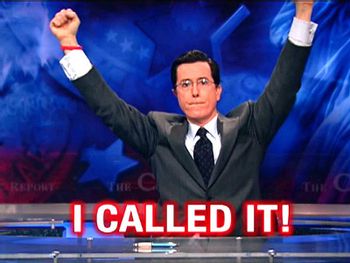 "Congratulations to those who figured this out. In my mind I am picturing a dart board with every available space riddled with darts."
— Tom Siddell, author of Gunnerkrigg Court
Advertisement:

It's well known that wild fans' theories are prone to being Jossed.

Sometimes, however, the opposite happens: after much speculation, a fan's theory is finally confirmed in canon, proving that the trees were, in fact, epileptic all along. Cue the perpetrators of their theory exclaiming: "I knew it! Told you so!"

This is known in some fandom circles as being "Kripked", named after Supernatural creator Eric Kripke as a counterpart to "Jossed".

May overlap with Captain Obvious Reveal and even The Un-Twist if the revelation is well-foreshadowed but most fans reject the theory exactly because it seems so obvious. And of course, may overlap with Epileptic Trees.

When, in-universe, the characters say I told you so, see I Warned You or I Knew There Was Something About You.

Compare with Ascended Fanon, where the author canonizes the crazy fan theory in response to the fans. Also compare Belated Happy Ending. See Knew It All Along for a related in-universe trope.

Alternative Title(s): We Knew It