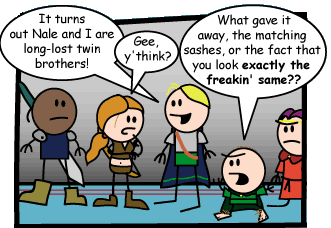 A Captain Obvious Reveal occurs when the writer sets up a Reveal for the story...only the audience figured it out already by the time they revealed it. Obviously, this will never apply to 100% of the audience, but when it applies to the majority of an audience, you have this trope on your hands.

This can happen for a variety of reasons. The most common one is that the author put in so much Foreshadowing that the reveal becomes clear long before it was intended. (The right amount of foreshadowing, of course, is a delicate balancing act; if you have too little in an attempt to avoid this trope audiences might accuse you of having an Ass Pull instead.) Another reason is that there were no other options for the reveal; if we're told that a character has a missing father, and there's only one character we already know who's the right age and position to have a missing child, audiences are likely to figure it out. Another possibility is that the secret is shown in an episode that gets broadcast before the one with the reveal. And finally, it could be that no matter how well you plan your plot twists, there will always be someone who can figure it out.

Note once again that this will never apply to 100% of the audience. Likewise, just because one audience member foresaw it doesn't mean we have this trope — that particular audience member is just good at recognizing foreshadowing. Also worth noting that among the thousands who watch a movie/read a book, someone is bound to simply guess the plot twist ahead of time, no matter how well it is set up — it's practically a statistical certainty. In addition, what separates this YMMV trope from the more general I Knew It! is audience reaction. With I Knew It!, the audience is ecstatic (or at least satisfied) about having pieced together all the clues and having guessed the twist ahead of time. With a Captain Obvious Reveal, making the prediction took so little brain power that the audience is glancing at the closest clock and waiting for the narrative to finally catch up.

Compare The Un-Twist; this trope is very similar, but not quite identical to that one. The Untwist can be intentional and always comes from too much Foreshadowing to the point the audience itself gets misdirected because they get suspicious of all the hints (which turn out to be not Red Herrings, but legit). Here, the obviousness is never intentional, and it doesn't necessarily need to have foreshadowing in the first place. The author genuinely thinks they have an actual twist in this case instead of a double subverted one.

Also compare It Was His Sled, where the twist was a surprise but has since become so well known to even those who never engaged with the work that it is no longer a twist. Contrast Tomato Surprise, Deus ex Machina, and Foregone Conclusion. The in-story version of this is Everybody Knew Already. A variation is the Obvious Judas when the most Obviously Evil character is revealed to be the villain. Related to Captain Obvious Aesop, when a moral that most people in real life believe already ("Murder is bad!") is treated in-story as a profound revelation.

Not to be confused with Dramatic Irony that leads to an Internal Reveal; characters may be surprised by information that is new to them, without any expectation that it will be a surprise to the audience.

Approach with caution. As this trope is related to plot twists, all spoilers will be unmarked in the examples below... but considering what we're talking about, they're really obvious ones.

The Powerbroker is [Spoiler?]!

The Screenwriter reveals the identity the Power Broker on Falcon & Winter Soldier, which the Producer already figured out.

The Powerbroker is [Spoiler?]!

The Screenwriter reveals the identity the Power Broker on Falcon & Winter Soldier, which the Producer already figured out.