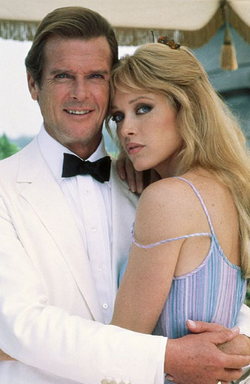 "Mr. Rochester was about forty, and this governess not twenty; and you see, when gentlemen of his age fall in love with girls, they are often like as if they were bewitched."
— Jane Eyre
Advertisement:

This is a romantic relationship where there is a big difference in age between two lovers.

The age difference usually causes some raised eyebrows or disapproving comments from other characters in the story, like these: "He's old enough to be your father!" — "You could be his mother or much... much older sister."

The age gap is often presented in the work as an obstacle that the couple must overcome as they might be judged by others. Some characters can assume that the younger one is only in it for the money or nice gifts, or that the older one only wants to score a hot piece of ass and is not interested in anything else. And it often can be precisely the case.

The age gap is often not significant because of the specific number of years, but because of the relative size of the disparity in age. As a general rule, when an older character is dating a character less than two-thirds of their age, it becomes notable; for example, 9 and 14 is notable, 19 and 24 not so much; 18 and 30 is notable, 38 and 50 again not so much. Naturally, this means that as the characters grow older, their age gap becomes less and less significant. Generally, the man is the older one and the woman is the younger one, though it can be reversed as well. When the woman is older, she may be Mrs. Robinson. As a general rule, the difference should be noted in-universe as unusual. It may often overlap with Unequal Pairing if the age difference overlaps with a difference in authority/status as well.

Sub-Tropes include the following:

The Jailbait Wait can be related if the younger one in the couple is below the legally defined age of consent.

The ways in which these relationships can occur in media can vary:

See Precocious Crush when the younger one is a child with a (usually one-sided) crush on a teenager or adult.

Much less Truth in Television, than many people think, at least in North-Western Europe and its offshoots (including America), due to the Western European marriage pattern. The extremely young ages/age disparities people usually associate with marriage in Premodern Europe were actually only common among the nobility, and then for political/diplomatic reasons. Among commoners, the average age of marriage for both men and women was in their mid-twenties, with a ten-year-or-so period of service before marriage was financially possible, during which they were not allowed to marry.

It's also worth noting that in fiction, issues that can arise with age-gap romances in real life are often glossed over. More neutrally, it is seen as arbitrary due to other factors making it a meaningless difference in a given fictional setting. At worst, some portrayals can end up romanticizing/fetishizing creepy or predatory behavior, especially if the older partner is in a position of authority over the younger (it's not unheard of in real life for abusers to intentionally seek out younger partners with less life experience and a lack of financial security to more easily control them).

It's more common now for fictional works to address these concerns and sometimes outright deconstruct the trope, as a reflection of society's shifting attitudes towards relationship dynamics. More recent works that do play it straight tend to opt for a reconstructed approach, with the couple discussing and working through the potential pitfalls of their age difference, and creators treating the subject with all necessary care.

"Silver Fox" became her nickname for him.

Here With Her Dad

Molly and Cole mistakes a couple for a father and daughter due to their appearance.

Here With Her Dad

Molly and Cole mistakes a couple for a father and daughter due to their appearance.