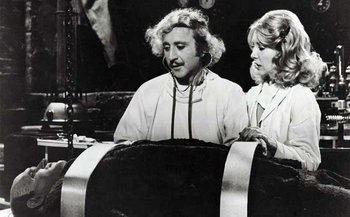 "A typical cosmic soap opera usually begins at a very ultra-secret government space project. The hero is a young electronics genius who is always busy formulating new laws of thermodynamics and astrophysics. The heroine is his secretary: efficient, hard-working, and rather attractive."
— Narrator, "Mars and Beyond", Walt Disney Presents
Advertisement:

In stories with a dashing Science Hero protagonist - an Adventurer Archaeologist, Bold Explorer, or heroic Mad Scientist - the male lead is often assisted by a pretty woman with a baffling lack of science knowledge. This assistant knows little about science or adventuring, but is easy on the eyes, a Brainless Beauty or Dumb Blonde. She usually dresses in clothing impractical for the lab or field, and frequently ends up in danger due to the hero's activities. The character may be introduced as a scientist in her own right, but this is always an Informed Ability. Her presence is especially inexplicable given that science in the setting of these stories was a male-dominated affair.

So why does our hero keep her around, despite her apparent uselessness as an assistant? There are several narrative reasons, some of which may be emphasized more than others depending on the work:

This trope makes heavy use of Men Act, Women Are and Mother Nature, Father Science. As society changes with regards to women in science and the Science Hero archetype has declined, this is a Discredited Trope. This trope was common in the Pulp genres such as Weird Science, Jungle Opera, and the Two Fisted Tale and their derivatives.

A sister trope to Mad Scientist's Beautiful Daughter, which dials up the contrast between the beautiful woman and her weird scientist father, as opposed to pairing them romantically. Contrast The Igor, the unattractive (usually) male assistant to a Mad Scientist.

May overlap with The Chick, Lady of Adventure, and Hot Scientist. Compare Faux Action Girl. Contrast Wrench Wench, another science side character who's more competent and self-assured. Not to be confused with Lovely Assistant, who may share some similar traits but is the assistant to a performing magician, not a scientist.