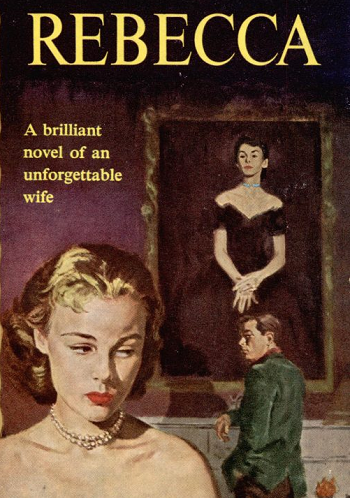 "Last night I dreamt I went to Manderley again."
— The Second Mrs. de Winter's Opening Monologue from both film and novel
Advertisement:

A 1938 novel by English author Daphne du Maurier (who also wrote Jamaica Inn, and the story that became The Birds).

While working in Monte Carlo as the companion for the wealthy Mrs. Van Hopper, our young, unnamed heroine meets the much wealthier Maxim de Winter — a moody, inscrutable widower presumed still to be in deep mourning for his late wife, the beautiful Rebecca, tragically drowned in a boating accident. Thus no one is more surprised than the shy little companion when Maxim not only seems attracted to her but impetuously proposes they wed there and then.

The first signs of trouble in Paradise appear when they arrive at Maxim's elegant old Cornish estate, Manderley. The servants have grown too fond of its late mistress and receive their new one coolly. Mrs. Danvers, the current housekeeper and Rebecca's former handmaid, is especially less than thrilled with the prospect of anyone taking Rebecca's place, and has made something of a fetish of keeping her things exactly as she left them — stationery in the desk, clothes in the cupboards — all monogrammed with that bold, decisive initial R.

As the novel progresses the shadow of Rebecca hangs more and more heavily over the house, making it increasingly difficult for our heroine to face the challenges not only of running a great estate but within her marriage — especially when it's increasingly clear that the two are related. Gradually, with a not-so-subtle assist from Mrs. Danvers, she begins to despair of ever living up to the perfect, proud, beloved Rebecca...

In 1940, Alfred Hitchcock directed the film version, his first American project, which starred Joan Fontaine and Laurence Olivier. It received 11 Academy Award nominations, winning for Best Picture and Best Cinematography (Black and White). It was the only Hitchcock film to win Best Picture, and Hitchcock didn't win Best Director—he never did, in fact, and had to settle for a lifetime achievement Oscar late in life.

Other adaptations include a 1938 radio dramatization on Orson Welles' Campbell Playhouse, a 1939 stage play, a 1979 miniseries on The BBC starring Jeremy Brett, a 1983 opera, a 1997 miniseries on ITV starring Charles Dance as Maxim de Winter and Diana Rigg as Mrs. Danvers, a 2008 miniseries on RAI1 and a 2006 stage musical.

A new adaptation was filmed for Netflix, directed by Ben Wheatley (High-Rise, Free Fire, Kill List) and starring Lily James as the second Mrs. de Winter, Armie Hammer as Maxim de Winter and Kristin Scott Thomas as Mrs. Danvers. It premiered on October 21st 2020, the day before what would have been Joan Fontaine's 103rd birthday.

This novel and its adaptations feature examples of: