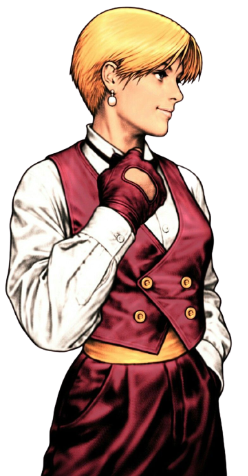 It's short for "all business".
Advertisement:

Since long hair is generally seen as a more "feminine" trait, when a girl has short hair it tends to mean she's decidedly less feminine than the average girl, maybe a Tomboy or Action Girl. This choice of having short hair usually indicates a girl has a more masculine personality, is tough and aggressive or is lacking in vanity. Girls may cut their hair short because they don't want to put up with the maintenance that longer hair requires. Other times it's short so no one can easily grab it in a fight, which Braids of Action and Tomboyish Ponytail are sometimes prone to be.

The contrast of a short-haired girl with a long-haired one can sometimes be used to portray a Tomboy and Girly Girl. If taken to extremes, a girl with Boyish Short Hair could be a Butch Lesbian, many of whom have this as an indicator. Maybe the result of an Important Hair Cut, with the new short hair being an indicator that the girl is ready to take action. Also, sometimes necessary for a girl to go undercover as a Sweet Polly Oliver.

Particularly in Anime and Manga, Tomboys may wear short hair with longer grown out sidelocks. The hair is still boyish, but the tails supposedly make it just girly and cute enough. It also makes them look a bit less professional, and more combatant than having short hair even all around.

Compare Tomboyish Ponytail and Long-Haired Pretty Boy, the direct opposite of this trope. Contrast with Long Hair Is Feminine. Also, compare its ancestor, the '20s Bob Haircut, and possible successor, the Sci-Fi Bob Haircut.

It should be noted that Real Life adult women with this type of hairstyle often have careers that do not allow long hair or have young children which makes maintaining long hair impractical. It should also be noted that short hair on women was quite fashionable in the 1950s.