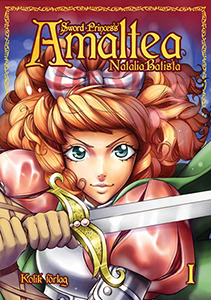 Not so Damsel in Distress...
"In a fairy tale world where Queens rule and magic is power, a young princess is sent on the biggest quest of her life - to rescue a prince in need! But when she does, the prince is not so willing after all..."
Advertisement:

Imagine all fairy tales you have read in your life. They all share the same formula: A dashing prince, a princess in distress, love at first sight and after some difficulties, a loving wedding and a happily ever after. Well, this fantasy story is not like that.

In a World… where women are the dominant gender and men serve under them; Princess Amaltea is given the task of find and rescue a prince in order to marry him and inherit his mother's Queendom since as the second born, she's unable to inherit her mother's. Our young heroine is all but excited at the idea but accepts in order to prove her value.

After being guided by an old woman to a tower guarded by a dragon, Amaltea realizes her time to shine has come! She slays the beast, goes into the tower and finds a sleeping, beautiful prince and wakes him up with a kiss...For then the prince freaks out and declares he's not marrying her!

Sword Princess Amaltea is a Fantasy manga created by Sweden artist Natalia Batista and published by Kolik Förlag since Fall 2013. It used to be published in Inkblasters until its shutdown in February 2015 and has now its own web page here

. The English translation was available there until the manga's American license was picked up by Tokyo Pop in 2017.

The story presents a curious flip in the Gender Code: All normally-male positions are held by women and vice-versa. Women are dominant, intelligent, powerful and commanding while men are demure, passive and don't hold much importance unless they're royalty. Yet, in this world where traditions are law and the Status Quo Is God, some dare to slide out of their role and long for more than what it's dictated by the code...

to fund a visual novel set after the events of the manga. The campaign was successful and it's expected to release in Spring 2021.

Expect many of the gender coded tropes to be flipped.