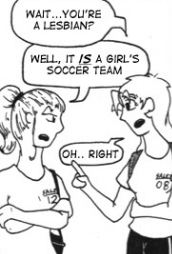 "And not all basketball players are lesbians — just the ladies."
— Michael Buckley, What The Buck?
Advertisement:

Much like the Navy, as well as all other military branches in general where women are involved, women's sports are really, really gay.

The Lesbian Jock—as her name would suggest—loves sports and also loves the ladies. Usually, this trope either takes the form of lesbian characters playing sports, or other people assuming (correctly or incorrectly) that a female character is a lesbian because she enjoys sports.

There seems to be a sliding scale of which sports are acceptable for girls without questioning their femininity, and which are not. Performance-based sports like gymnastics, figure skating, diving, and cheerleading are all "okay"; most competitive sports like softball, volleyball, track, swimming, soccer, tennis, basketball, field hockey and in some cases, depending on how the other men view them, combat sports such as boxing, kickboxing, wrestling, and mixed martial arts are roughly 50/50 in that they can swing either way; but "masculine" sports like ice hockey, American football, rugby and, strangely enough, golf are almost a sure bet.

From the standpoint of interest in said sport indicates "gender nonconformity," the Spear Counterpart would be Performance Artist, where certain performance arts are "reserved" for women and that any man who choose to partake in them are automatically more "feminine" (and thus in turn inclined to homosexuality) than those who don't. The same logical fallacy applies.

One common Sub-Trope in works with a school setting is the Butch Lesbian girls' P.E. teacher.