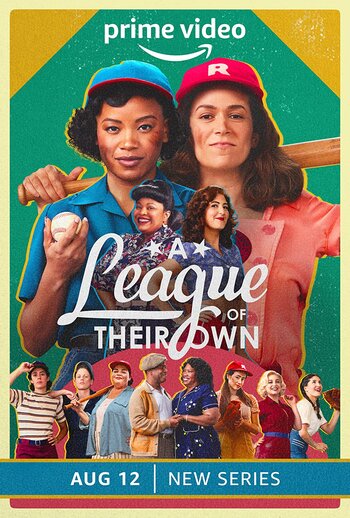 A League of Their Own is a 2022 Amazon Prime TV series based on the 1992 film of the same name. Like the film, it tells the story of the formation and first season of the All-American Girls Professional Baseball League. The characters and storyline are original to the series, though 'inspired' by the real women who formed the Rockford Peaches and other baseball events of the era.
Advertisement:

The AAGPBL was formed during World War II to boost flagging game attendance with so many male players (And audience members) taken out of the game and into the armed forces. Its players were scouted from amateur women's leagues and clubs throughout the United States, and in some cases even beyond. For some women, being able to play professional baseball gives them independence and economic freedom that they were never able to achieve before. Others want to play solely for their love of the game. Regardless of their reasons, they face constant opposition both on and off the field.

In addition to exploring the sexism of the era which the women had to deal with, the series also explores in-depth the racial, sexuality, and gender issues which pervaded society at the time (and still today).

Created by by Will Graham and Abbi Jacobson (who also stars as main character Carson Shaw), the eight-episode season covered initial tryouts up through the 1943 league championship.