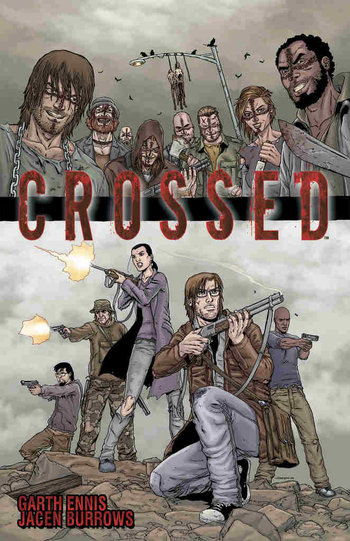 "You're either dead or alive. That's all there is. You stay the second until the first looks so good you can't ignore it. Because, seriously? You don't even want to think about the third."
— Richie, Crossed: Dead or Alive
Advertisement:

Crossed is what happens when Garth Ennis goes to his really bad place.

Beginning in 2008, people throughout the world begin coming down with a virus, which is spread through contact with bodily fluids and overcomes its victims almost instantly. Once a human succumbs to the virus, they get a distinctive facial rash across their forehead and face and a desire to murder, rape, set aflame, desecrate and rape again anyone they come across, like the "reavers" of Firefly. Within a day of the virus's appearance, most communities are bands of isolated survivors who are trying to A) stay alive and B) remember why they want to stay alive in the first place.

Crossed is largely devoid of Ennis's trademark Black Humor. It is a grim, grim book, sure to prove an endurance test for most readers. While works like The Boys and Preacher might wallow in silly violence for some sick laughs, Crossed (or at least the original) actually shows a lot of restraint in how it treats the violence, devoting a lot more time to putting a human face on the misery of the survivors. The carnage is described a lot more than it's shown, but when it's shown...

The series includes the following volumes:

On March 13, 2013, Avatar announced a series of Crossed "webisodes" written and directed by Ennis, with supplemental webcomics. This apparently got stuck in development hell, as no further word has been said about them. There were also rumors of the sequel to "The Fatal Englishman" being developed, though these appear to have died down as well.