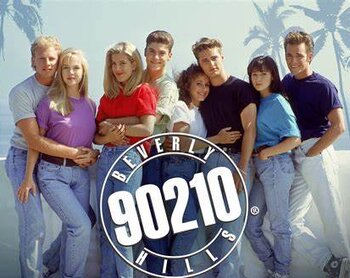 "Once upon a time, there was a magical place. Where Beamers glistened in the sun, and all the teenagers were white and in their 30's..."
— Roger, American Dad!, "Stan of Arabia"
Advertisement:

Beverly Hills, 90210 was a Teen Drama that is credited with codifying the genre as we know it today and gained immense popularity during the early 1990s. It ran on Fox for ten years (from 1990 to 2000), and had all but changed its entire principal cast by the end of the show's run.

The show focused primarily on the Walsh family, particularly fraternal twins Brandon (Jason Priestley) and Brenda Walsh (Shannen Doherty), who had just moved into Beverly Hills and were (at least initially) suffering a certain degree of culture shock. The action also included the twins' friends; the brooding bad boy Dylan McKay, the goofy 'big man on campus' Steve Sanders, the bookworm and school paper editor Andrea Zuckerman, the Alpha Bitch turned Lovable Alpha Bitch Kelly Taylor, the ditz Donna Martin, and the dorky freshman turned aspiring musician David Silver. The show began essentially as an American, more glamorized version of (the original eighties) Degrassi (of which it is rumored Aaron Spelling nearly adapted instead), adopting its format of tackling social issues an episode at a time during its first season (and to an extent the second season), but by Season 3 and especially after the cast graduated from high school, it became more of a Prime Time Soap.

The show's casting includes some of the most dramatic examples of Dawson Casting in recent memory (and this show predates the trope namer), to the point where many sites often refer to the trope as "90210 Syndrome". Luke Perry was 24 when he began playing Dylan as a junior; even worse, Ian Ziering was 26 playing 16-year-old Steve Sanders and Gabrielle Carteris was 29 playing 16-year-old Andrea Zuckerman. Only Brian Austin Green (David), Douglas Emerson (Scott) and Tori Spelling (Donna) were real high school-aged teenagers playing their age.

It is debated when the show declined in quality; most agree that it declined after season 3, which was when the cast graduated from high school, but some put the beginning the decline to the beginning of season 5, after Brenda left. Some even argue the show really hit its stride post-high school.

Had a Spin-Off in Melrose Place (which itself had a less successful spin off in the short-lived Models Inc.) and Sequel Series simply titled 90210 which ran from 2008-2013 on The CW. The new series is mostly focused on a new cast of characters, though Donna and Brenda have made cameo appearances and Kelly is an important recurring character. One of the main characters of the reboot, Erin (Silver), appeared as a plot point in the original series as Kelly's baby half-sister. A second revival was announced in February 2019, that featured fictionalized versions of themselves trying to get a reboot of the series on the air. Sadly, Luke Perry —who was announced to be showing up in a limited role— suffered a massive stroke on the same day of the announcement, and ultimately died a week later. The remaining cast members continued the project in honor of him.