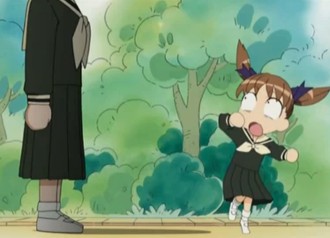 Bigger than Treesus.
"...and the boys are too short and you feel like a HIPPOPOTAMUS!!"
— Harriet Welsch on why she dislikes dancing school, Harriet the Spy
Advertisement:

It's hard enough being a puberty-affected teenager, but the Huge Schoolgirl can't really hide the fact she's so much bigger than everyone. If they don't have the flair, this can leave a character gangly and awkward, especially with the Japanese obsession with cute, short women.

This installs an enormous physical complex on the character, despite the near guarantee she'll still be quite pretty. Also usually coincides with being the most pectorally developed character. A character who comes to terms with their appearance can become beautiful with enough self-esteem. Without that self-esteem, though, you can wind up with an oversized Shrinking Violet...a Weeping Willow, if you will.

Although this can affect adult women, this trope is much more obvious in high school aged characters; this girl will be obviously taller than her peers, and usually bustier. Otherwise this character can be a tomboy or a domestic type.

A strangely specific aspect of this trope is the actual measurement, usually 170 centimeters tall (about 5'7"). While this can seem like less of a big deal depending on what country you're from — the average height for American women ranges from 5'3" to 5'5", using numbers based on self-reported surveys (which contain a lot of heights with shoes on reported), although most medical journals put the average American woman's height at 162 cm or about 5'4", making this trope make more sense. But judging by how many women wear heels, and the dissonance between surveys and medical journals, it seems that tall women are actually seen as desirable — this measurement is a huge deal in Japan, where the average female height is 158 cm (roughly 5'2"), although some medical journals list it as being as short as 156 cm (roughly 5'1").

Wikipedia has a table listing the average heights of men and women in many different countries. According to that table, the average height for men is consistently 10-15 cm taller (about 4"-6") than that of women from the same country. In Japan, a teenage girl of about 170 cm is roughly as tall as an average sized adult Japanese man. In works where it isn't obvious if someone is a huge schoolgirl because there aren't many adult/teenage female characters to compare her with or in settings where average adult heights differ from those in modern Japan, this should be kept in mind.

Oddly enough, although this trope is often in play in teen dramas, "Hollywood Average" height for women is around 5'6" or 5'7", leading to a bit of a Teens Are Short stereotype that's quite untrue, as adult height is mostly reached by age 14-15 for boys and 12-13 for girls with at most another inch and a half (but usually an inch or less) to be obtained by age 22 for girls and 25 for boys.

Not to be confused with Dawson Casting. Compare to Statuesque Stunner, which these girls might become. For the logical extreme about gigantic schoolgirls see Giant Woman. The inverted Distaff Counterpart to Tiny Schoolboy.

Marin is excited to meet cosplayer Juju's Younger Sister, Shinju, who she imagines to be a smaller version of the already petite Juju. It turns out, Shinju is much bigger than Juju... in more ways than one. Both Marin and Gojo are perplexed

Marin is excited to meet cosplayer Juju's Younger Sister, Shinju, who she imagines to be a smaller version of the already petite Juju. It turns out, Shinju is much bigger than Juju... in more ways than one. Both Marin and Gojo are perplexed