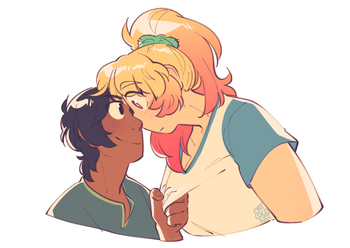 is a webcomic by Ayme Sotuyo, about the adventures and misadventures of (principally) Daniel del Toro, a high school student who for reasons of his own, frees a demon who goes by the name of Esther. The general setting is a Crystal Dragon Jesus religious boarding school on an island that has a lot in common with Cuba by the name of Santagüey.

Esther was imprisoned for a period of about five hundred years, under the site of the present school. Daniel released her, with no real idea what he was getting himself into; now she is in his world, and he has lost his soul in consequence.

She claims to be helping Daniel, but HOW remains to be established. She also has some (so far unspecified) purpose of her own, requiring his participation. As the series continues on, it's soon revealed Esther isn't the only mystical being in the school and that the religion on the island might not be so cut and dry as it seems.

On January 2021, Ayme announced she was canceling the comic]], citing personal and financial problems keeping it going and ultimately claiming it as a failure because of it. The series continued the rest of its update on Patreon before being put on the website. Leaving on a cliffhanger and going into indefinite hiatus. Ayme hasn't counted out the possibility of a continuation but chances at the current are slim. An archive can be found here

unDivine has the following tropes include