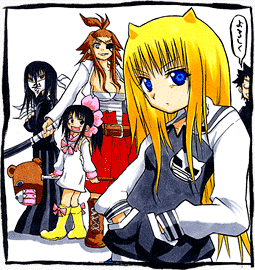 The Demon Head Gang note from left to right: Momo, Mitsuki, Yuna, and Saya, with Tadashi on the far right.
Advertisement:

Onidere is a manga by Crystal na Yousuke, which ran in Shonen Sunday from 2008 to 2011.

Tadashi Iwamato is a second-year in junior high, a member of the handicraft club, and someone who enjoys knitting. He's in a relationship with Saya Ikushima, who happens to be the leader of an all-girl gang and would get killed if anybody finds out.

Not to be confused with Yandere Kanojo, which is only strikingly similar to this series in setup.