Sand in My Eyes 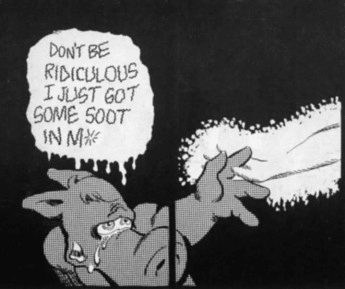 Since Men Don't Cry, they can't very well be seen with Ocular Gushers or, worse, Inelegant Blubbering. So the macho tragic hero will often only shed a single, sparkling tear, to accent his pain while making sure he keeps his awesome machismo. Used particularly during a flashback to the tragic past.

In film and TV, the equivalent is the usually stoic hero's eyes getting watery, upon which the more emotional supporting cast will express their surprise to see a show of general empathy. The reply? "It's nothing, I've just got a little sand in my eyes."

Attempts to comfort may provoke Don't You Dare Pity Me!.

Something of a Discredited Trope — nowadays it's just as likely to be used to evoke pity for the character's inability to express his emotions honestly as it is to portray them as strong and stoic. That's assuming it's not being outright mocked.

Contrast: Manly Tears, which is admitted; Past Experience Nightmare, where the hero really can keep it buttoned up ... while awake; Tender Tears of exquisite sensibility; Mistaken for Brooding, which might happen when there really is an eye injury; Single Tear, Inelegant Blubbering. Compare Trying Not to Cry, Onion Tears, which may also be used as an excuse. The literal case of this trope is often preceded by A Handful for an Eye. If anyone with two or more functioning brain cells would be able to see that it isn't sand, it overlaps with Obviously Not Fine.

Not related at all to a certain Charles Atlas advertisement.

When Sandy cries due to homesickness, her helmet fills with tears. She claims her helmet had simply sprung a leak, but SpongeBob doesn't buy it.

Alternative Title(s): Something In My Eye

When Sandy cries due to homesickness, her helmet fills with tears. She claims her helmet had simply sprung a leak, but SpongeBob doesn't buy it.