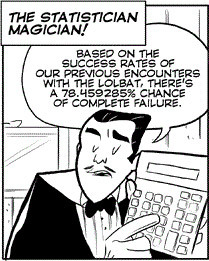 For whatever reason, very intelligent people in fiction are incapable of summarizing anything. No matter what you ask them, you'll get exactly what you asked for, with way more detail than is necessary. No robot will ever say "it's pretty darned likely" or even "about one in 8000 that you'll fail"; they say "There is a 99.9875653 percent chance of success".

Common in Spock Speak and Robo Speak. Spock often estimated time in tenths (and later hundredths) of a second, which is of course useless as the sentence takes several seconds and there is no understood convention of exactly what instant that would refer to, even if one were capable of tracking time with this precision.

This happens most with numbers, but can show up in factual explanations as well. When you ask your Robot Buddy if the air is breathable, odds are he'll go into more detail than you really need.

Note that in real life, the concept of significant figures

means that, depending on the circumstances, ending a number with a lot of zeroes is both intuitive and practical. Use of overly precise statistics

to verify claims will often be a sign of pseudoscience rather than proper scientific method. This is particularly true when the statistics in question could not have realistically been measured to that degree (i.e. the margin of error is being ignored) or if they are subject to major fluctuation anyway.

This is very frequent in Exact Time to Failure counts; this is largely because the more figures are shown, the faster the timer appears to be counting down. This, of course, lets the hero stop the timer at exactly 0:00:01.

See also Mouthful of Pi and Good with Numbers. Often used by characters like the Clock King. Sounds like, but is (usually) unrelated to, Improbable Aiming Skillsnote The few times that they are related are when the mass, force, and trajectory of a missile are explicitly and precisely calculated. ...And 99¢ is a trope that plays with this one. Compare to Your Days Are Numbered and the Non-Natural Number Gag.

Bugs under the floor

<br><br>While spying on his brother under the floor, Daggett notices some bugs which he keeps pushing out from the hole. When he lights a match to see where they're coming from, he freaks out and knows exactly how many bugs there are. 4,023 of them.

Bugs under the floor

<br><br>While spying on his brother under the floor, Daggett notices some bugs which he keeps pushing out from the hole. When he lights a match to see where they're coming from, he freaks out and knows exactly how many bugs there are. 4,023 of them.