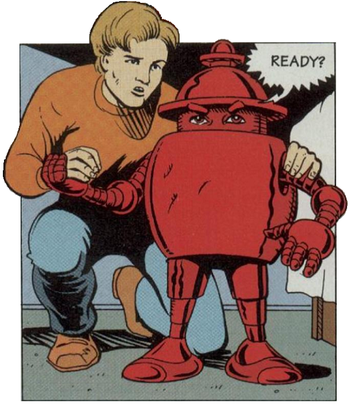 In the 1990s, Boys Life published a Comic-Book Adaptation of the first two Norby stories. Crediting Janet Asimov and Isaac Asimov as the original authors, they published the first book, Norby, the Mixed-Up Robot, from January 1990

to December 1995 (skipping the March 1994, July 1994, March 1995, and August 1995 issues). The artist for the first adaptation was Ernie Colón, while Terry Tidwell created the second adaptation.

While the artists had to condense the story to make it fit within the pages allotted by Boys' Life, their most dramatic change from the books is probably deciding to draw Norby with a red body and forward-facing feet/eyes, rather than his silver body and ability to move/see forward and backward with identical ease.