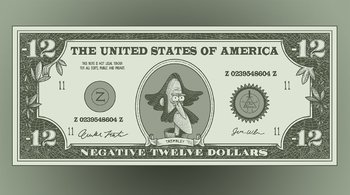 This is less than worthless!
Advertisement:

In a context where the viewer expects a natural number, like 1, 2, 10, or a billion to be used, a number from a larger set, like pi, infinity, three quarters, or negative twelve is used instead. It's funny because it makes no real-world sense. In formal mathematical jargon, this is a violation of the domain of discourse.

May be explained in the story, maybe not. Either way, it's supposed to be mathematically correct, unlike Counting to Potato, where nonsense numbers are used because the character communicating them doesn't know how to count right. Compare Eleventy Zillion, where nonsense number names are used to suggest vaguely-defined but very large numbers.

A Missing Floor will often have a fractional number between the numbers of the two floors it's physically inbetween. Minus World and a Glitch Entity can cause this to appear in video games. Episode Zero: The Beginning and Unusual Chapter Numbers are out-of-universe examples.