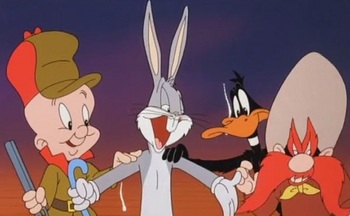 Awwww! Look how happy they are!
Advertisement:

Directed by Greg Ford and Terry Lennon, it was a self-parody of the specials that were produced for Bugs' 50th anniversary. In it, the four toons go through a series of disastrous takes while trying to produce the "Bugs Bunny 51½ Anniversary Special".

The film was completed in 1991, but was withheld from a proper release, supposedly because Warner Bros. were not amused by Daffy accusing them of "not having an original bone in their body". A later short by the same duo which did see a release, Invasion of the Bunny Snatchers, was, ironically, even more critical of the studio.

It was eventually given what would now be called a small Early-Bird Cameo in the intro of the Kids' WB! Bugs N Daffy show before getting a quiet release on Cartoon Network in 1997 and has since become a Cult Classic for the edgy humor which originally got it blacklisted. It was also released on the first Looney Tunes Golden Collection DVD set.