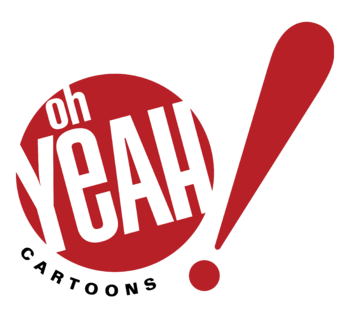 After leaving Hanna-Barbera in late 1996 to form Frederator Studios, Fred Seibert was still in love with the idea of making Animated Anthology shows in order to showcase new, up-and-coming talent. Having just finished up the What A Cartoon! Show over at Cartoon Network, where he produced 39 animated shorts that led to the creation of five successful television series, Seibert called up Nickelodeon to see if they were interested in their own equivalent program. Considering that this was the person who helped the competition suddenly become a threat to the popularity of their Nicktoons brand, their answer was obvious. And so Oh Yeah! Cartoons was born.

Unlike What A Cartoon (whose shorts were later compiled into a half-hour show, after initially airing by themselves under the "World Premiere Toons" banner), OYC was a half-hour show from the start; various live-action hosts were used (another departure from WAC) — real school kids for the first season, Kenan Thompson for the second and Josh Server for the third.

In some ways, Oh Yeah! Cartoons was more successful than its predecessor, producing over a hundred shorts, some of which became short mini-series within the program itself, such as Rob Renzetti's Mina and The Count. On the other hand, less full-length series were actually greenlit from this large batch of content. Whereas WAC had five full-length shows come out of it, OYC had Nickelodeon make only three of its shorts into series:

A few other noteworthy creators who created Oh Yeah! Cartoons shorts and eventually got their own solo projects unrelated to it include Seth MacFarlane (Family Guy), Dave Wasson (Time Squad) and Carlos Ramos (The X's). Other noteworthy creators include Mike Bell, Alex Kirwan, Tim Biskup, Pat Ventura, Steve Marmel, Zac Moncrief, and Vincent Waller, who would reappear as writers and directors for several popular and influential animated series in the following decades, such as SpongeBob SquarePants.

Random! Cartoons was a similar Nickelodeon anthology show that was originally intended as a fourth season of Oh Yeah! Cartoons, but was retooled into being its own thing at the last minute, known mainly for giving birth to Fanboy and Chum Chum, Adventure Time and Bravest Warriors (the first of the three being the only one to have the series also produced by Nickelodeon, as Adventure Time was picked up by Cartoon Network instead after Nickelodeon rejected it and Frederator Studios produced a Bravest Warriors series with no involvement from Nickelodeon as part of their Cartoon Hangover YouTube channel).

Compare the Nickelodeon Animated Shorts Program, Nickelodeon's own animation incubator made without the involvement of Frederator, which has its shorts periodically uploaded online.