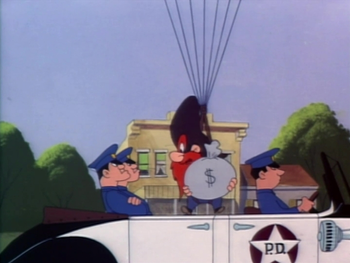 They got him right where they want him.
The Monarch: He threw me in jail. Literally. Threw me right into the yard at the state prison. Then he shouts up to the warden, "Looks like this one won't be causing any more trouble!" And he flies off with a gallant salute.
Dr. Mrs. The Monarch: Oh my God.
The Monarch: Apparently nobody ever told him what due process was.
— The Venture Bros.
Advertisement:

In cartoons, the hero finishes off the villain with a powerful blow that sends the latter flying in the air and crashing through the ceiling of a prison and conveniently in a jail cell. How precise or lucky the hero was in doing this, how the villain doesn't suffer any injuries in the process, or whether the hole in the roof is going to be repaired are usually not addressed.