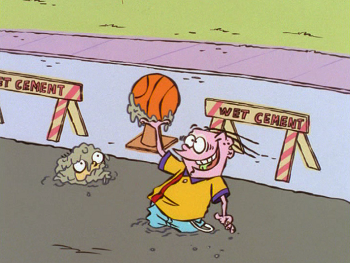 When a sidewalk is being paved in fiction, it probably won't dry before someone leaves their mark in the wet cement. Either during a Chase Scene, where a "Wet Cement" sign is shown before someone runs through it, or as a form of graffiti.

This process takes a long time, even with the quick-drying variety. Unless you're in a cartoon, in which case you should avoid this stuff like the plague, because if you step in it, it'll harden instantly and probably trap you in it. Someone may also trap someone deliberately with this method. Results can resemble Taken for Granite.

While the material used to pave sidewalks is properly referred to as 'concrete', the sign in front of it is usually labeled "Wet Cement". Cement is actually the gluelike substance in concrete that makes it hard and binds it together, but the sand and gravel (technically called "aggregate") is what makes it useful to walk/drive on or build stuff out of. Mix cement & aggregate, you've got concrete. Add water and you've got wet concrete to pour.

Related to Cement Shoes, Sheet of Glass and Fruit Cart.