Western Animation / Oggy and the Cockroaches 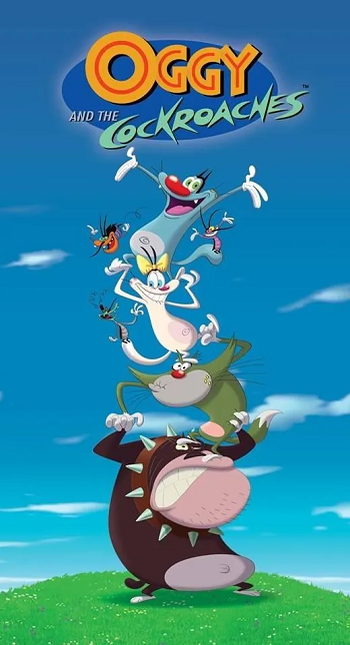 The slapstick trickster cartoon. You know the drill: some character pulls a mean one on another. The victim retaliates. Both parties get caught up in an escalating spiral of cartoon violence. Hilarity Ensues, until houses are leveled, forests are ravaged, cities are lain waste, and the world goes Kaboom!! Then they start it all over again in the next episode.

This time-honored formula, featured in many Looney Tunes and Tom and Jerry shorts, gets a revival in the Gaumont (France's premier film studio) production Oggy and the Cockroaches (Oggy et les Cafards- 1998-1999, 2008, 2013, 2017), believed to have debuted in Space Goofs episode "Venus Junior". Each 7-minute short (there are at least 351 of them) follows the life of the rotund blue cat Oggy, who has the misfortune to share the same house with three cute but exceptionally mischievous roaches: Dee Dee, Marky and Joey. Their sole purpose of existence is to have fun with Oggy by pulling a series of practical jokes. Oggy is sometimes helped by his cousin Jack, a green cat with a knack for mechanics and a short fuse. Factor in a burly neighborhood bulldog named Bob and a Love Interest named Olivia (introduced in later seasons), and you have a great slapstick set-up.

Oggy and the Cockroaches is renowned for its expressive use of mime — the cats may make cat sounds or (rarely) speak in gibberish, but there is no dialog, and written words are kept to a minimum. Without the need for dubbing, the show is able to reach a wide international audience. Except in America, where the show ran briefly on Fox Kids in the late 90s without success, and returned in the 2010s on Nickelodeon only to run into a controversy involving censorship which led to the show's quick removal.

A movie detailing the characters' adventures through the ages was released in 2013.